This was a second piece in my Debut Concert, a Danish premiere, and I believe Scandinavian first performance as well. After Scratch Data by Raphael Cendo, which was an introduction to the show, here it started first bigger segment of my program. This segment was an intimate and performative part, centered around prayer, silence, air and voices. An inner and outer conversation.

The score is written in a very special way, and in similar manner as other pieces of this kind by Billone (counting many “Manis” too). I think, it is a pleasure only to look at it and admire. You should take a look at the composer’s website: http://www.pierluigibillone.com/en/home/ 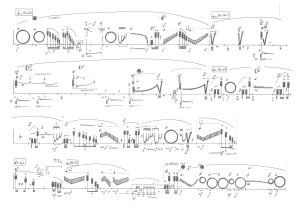 “Gonxha” is written like that not for fun, though it gives a lot of fun to work with it. I have always preferred reading and playing from handwritten scores, or a special graphic systems. It makes me feel a better connection to the music. These small things that are sometimes not clear to understand give some space for interpretation and let me be more independent, observant and open.

My first rendezvous with Billone’s music took place at the Impuls Festival in 2013. During one of those concerts played by tutors, Christian Dierstein performed “Mani Gonxha”. I have found this style distinct, sort of personal in different way than others. I like the idea that a composed piece of music is no longer only composer’s property. It also belongs to the performer and, in fact, to the audience too. After few months of circuit around Billone’s music I have started analyzing and reading “Gonxha” myself. In fact, during this process, and also after listening to one performance of “Mani de Leonardis”, I have realized there are no extraordinary actions. It is not stage acting that is crucial. It is something else…

Here is a word from my program:

“Pierluigi Billone belongs to one of those rare magicians, who can suspend lineal time. One assumes with his music as if to enter a ritual space” (Heinz Rögl)

“Mani. Gonxha” (2012) is one of the “Mani-pieces” group in Billone’s catalogue. It’s a prayer. Succession of introverted and extraverted elements, mixing in order to establish an emotional balance. The action of two hands is crucial and a simple musical instrument is an extension, a connection. The score focuses on those manual actions. This music is composed for Christian Dierstein.